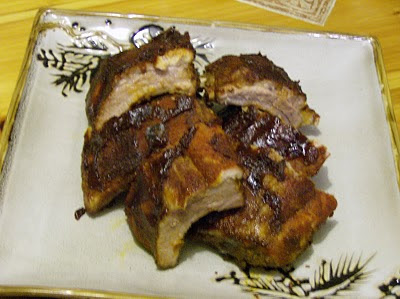 I found these racks of baby-back ribs on SUPER sale at the grocery store and grabbed some up on a whim. I'd never made ribs before, on the grill or otherwise, so I did a bunch of reading to try and figure out what to do with them. The general consensus seemed to be: rub them with something, cook them low and slow, and smother them with some sauce when they were cooked. So...that's what I did!

The rub was a combination of paprika, chili powder, garlic powder, onion powder, salt, cumin, brown sugar and a little cayenne. I rubbed quite a lot of it into the meat on both sides, then wrapped the racks up together in some cling film and let them sit in the fridge for an hour.

When it was time to cook, I set the oven to 300, unwrapped the racks of ribs, and set them in a deep roasting pan. I added a bottle of beer (Otter Creek Copper Ale) and then covered the pan tightly with foil. The ribs cooked for about an hour and a half covered, then I uncovered them, drained the liquid and spooned some barbecue sauce (which I also made from scratch) over them to cook for the last half hour. The end product was moist, tender, flavorful meat with a sticky caramelized glaze. I served them with homemade cole slaw. 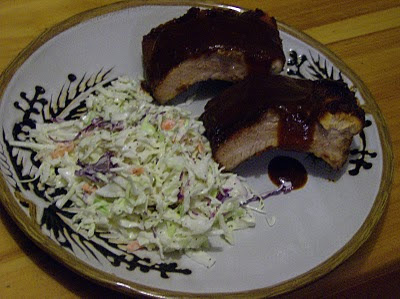 These were super good, and well worth the wait and the torture of smelling them all afternoon. And for the record, homemade barbecue sauce is SO much better than store-bought. It was super easy to make - ketchup, molasses, apple cider vinegar, and some spices (of which I neglected to measure any, so I'll likely never be able to replicate the sauce again. Figures!).
Posted by Unknown at 7:38 PM 2 comments:

I made taco salads with no taco shells / tortillas. I used beds of romaine lettuce (which, frankly, I should have known better. Bagged romaine lettuce = ick), and added chopped avocado, tomato, onion, and black olives. For the meat, I used 90% lean ground beef. I browned it, drained the excess fat, and added a mixture of cumin, chili powder, cayenne, thyme, oregano, garlic and onion powders, salt and corn starch. It's basically the same thing you get in those little packets of pre-made taco seasoning, except with a lot less salt and no weird chemical ingredients. I added a cup of water and simmered until the meat was saucy, then scooped it on top of the salads and topped with some plain yogurt. 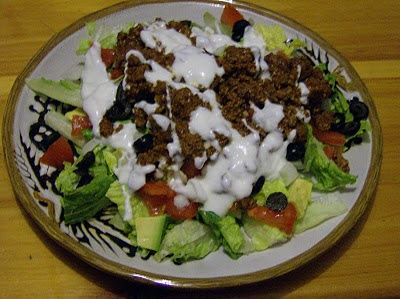 Aside from the romaine lettuce having tons of crappy rib pieces in it, these were really good!
Posted by Unknown at 7:21 PM 1 comment:

Email ThisBlogThis!Share to TwitterShare to FacebookShare to Pinterest
Labels: salad

In an effort to be more healthy, I'm trying to transition our diet back to a focus on vegetables and protein and far less grains. Thus, tonight we had salmon and two different veggie sides! 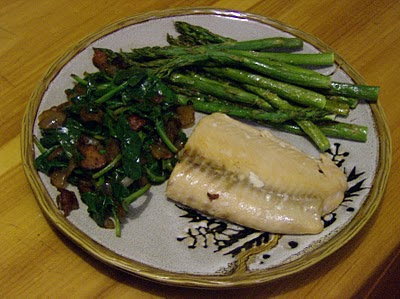 I actually cooked the salmon and the asparagus together in a super hot (500 degree) oven. To prep the salmon, I just rolled it in some olive oil. The asparagus was the same, except I also sprinkled a little kosher salt over it. I arranged it all on the same pan and baked it for about 10 minutes at 500 degrees.

Sauteed spinach is something I really love, as there are so many different flavors you can incorporate into it. For this batch, I chopped up three slices of uncured bacon and cooked them until they got quite crisp. I scooped the bacon out and put it on some paper towel to drain while I chopped up half a white onion and sauteed that in the accumulated bacon fat (don't worry, it wasn't that much). When the onion was soft and golden brown, I added some balsamic vinegar and let it cook out for a minute or so. I added a whole bag of baby spinach to the hot pan and tossed it until the spinach wilted. So yummy!
Posted by Unknown at 7:43 PM 2 comments:

This is a reprisal of the Thai Peanut Noodles I did a while ago. I did it exactly the same except: a) I used real udon instead of linguine, and b) I used shrimp instead of chicken. 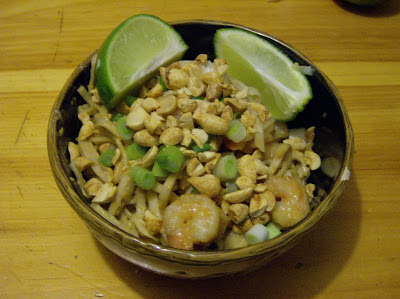 I'd never cooked udon noodles before, so I got a little bit of education here. Udon apparently doesn't like to sit around after it's been cooked. Pasta in general doesn't like to sit around, I know, but this udon sat maybe 3 minutes and it turned into a big sticky mess. Once I got the sauce into it and started tossing it, it started to loosen up...but there was major potential for a big gummy mess there for a minute or two!

For the shrimp, I just stir-fried them for a few minutes in a mixture of soy sauce, sriracha, garlic and ginger. When they were cooked through, I tossed them in with the sauce and noodles, chopped up some peanuts and scallions roughly and added those in, then finished it off with a heavy squeeze of lime juice.

I can't get over how good this is. I could eat it like three times a week and be a happy camper.
Posted by Unknown at 7:27 PM No comments:

Email ThisBlogThis!Share to TwitterShare to FacebookShare to Pinterest
Labels: shrimp

Sorry for being gone so long, but things have been a little crazy. I'm doing a little catch-up here, so bear with me. :) 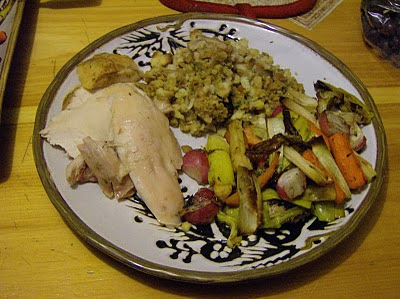 Here we have some breast and thigh meat from a whole chicken that I roasted, as well as a mixture of parsnips, potatoes, carrots, radishes and leeks. The stuffing on the side is my normal cheater-y boxed stuffing mix. Roasting a whole chicken always seems like such a good idea when I start, but it always ends up taking wayyyy longer than I bank on it taking and it drives me nuts. I ended up with dead-cold veggies and stuffing because they were done like 45 minutes before the chicken was. Good thing they're warm-up friendly!
Posted by Unknown at 7:16 PM 1 comment:

I can't give you the recipe for these (it's my secret), but I can taunt you with a (blurry) picture of them...:D 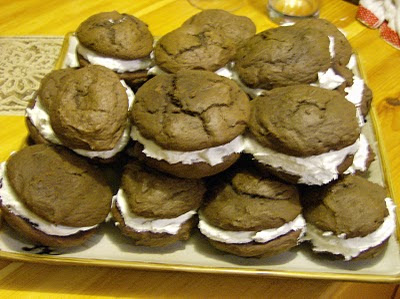 These are for the monthly birthday "cake" at work, on the request of the only person with a birthday this month! She actually requested a gigantic whoopie pie cake, but I couldn't quite figure out how to transport it, so I went for individuals.
Posted by Unknown at 10:15 PM 2 comments:

Email ThisBlogThis!Share to TwitterShare to FacebookShare to Pinterest
Labels: baking

I used to call this kale and kielbasa soup, but I'm trying to work more beans into our diets, so the kielbasa kind of took a back seat in this batch of soup. It's still in there, don't get me wrong...but there's also a ton of kale, a can of white beans, a can of chickpeas, carrots, celery, onion, and a big can of diced tomato along with chicken stock and some oregano and thyme. 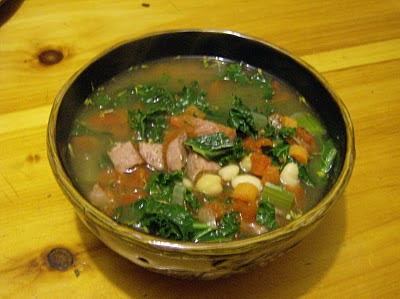 It was a good batch. I actually didn't mean to put chickpeas in the soup - I had planned on using just white beans, but one of the cans I opened was chickpeas so I figured what the hell and dumped 'em in. They gave a nice difference in texture, but I don't think I'll put them in next time (assuming I read the cans before I open them next time...derp). I just like white beans better.
Posted by Unknown at 10:11 PM No comments:

I got this recipe out of an America's Test Kitchen magazine, which I really do adore, but I have to say that whoever was timing this recipe and decided it only takes 30 minutes from start to finish? Is on crack. It was more like 45 minutes, and that's even with averaging in some of the things I knew I was being a slow-ass on. The end product was great and totally worth it, but it was most decidedly not a 30 minute meal. 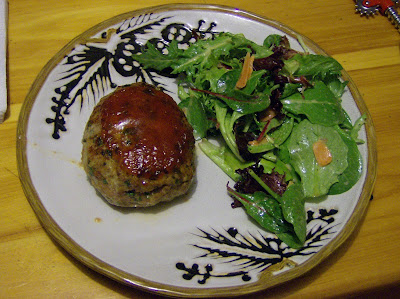 I started with a mixture of pulverized saltine crackers, Worcestershire sauce, dijon mustard, an egg, onion powder, garlic powder, salt, pepper, cayenne and a bunch of chopped fresh parsley. I added a pound of ground beef and a pound of ground pork and squished it all around until it was mixed, then formed it into four 4"x3" mini-loaves. These went into a pan with some canola oil to brown on both sides. The glaze is made of ketchup, brown sugar and cider vinegar. When the loaves were browned on both sides in the pan, they were transferred onto a broiler pan and the glaze was spooned over. They went into a 500 degree oven for about 12 minutes, until they hit 160 on the meat thermometer. I pulled them out and let them sit while I tossed the salad (haha) with a dijon vinaigrette.

The meatloaf came out nicely moist and flavorful, with a good crust on the outside. I don't normally go for ketchup baked onto the top of meatloaf, but the glaze in this recipe is actually quite good. I'll definitely make these again, though I won't be telling my husband that it will be ready in 30 minutes! ;)
Posted by Unknown at 7:45 PM 1 comment:

We were wandering around the grocery store this afternoon debating what to have for dinner. Mark suggested spaghetti bolognese. I decided that sounded good, then realized that the tomato sauce I usually make isn't actually a bolognese by any means. I started to explain this to Mark and was met with an increasingly glazed-over stare. His reply?

"How about this: you make something with meat and tomato that goes over pasta, and I'll eat it."

So, I did! I'm calling it semi-bolognese because I didn't put any cream in it, I didn't use celery in the sofrito, and I used a lot more tomato than a traditional bolognese. 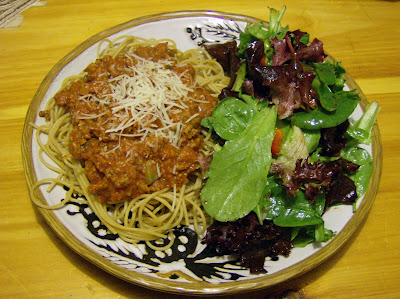 I started with a "meatloaf mix" of ground pork, beef and veal. I browned it with some salt, pepper and garlic powder, then drained it and wiped out the pan. I added a tablespoon of butter to the pan, then sauteed a cup of chopped onion, a quarter of a cup of grated carrot, and a half a cup of chopped green pepper. When the veggies were soft, I added in two cloves of chopped garlic, and 2 tablespoons of tomato paste. I let the mixture cook down for about 2 minutes, then added about a quarter cup of white wine. This cooked down for another 2 minutes, then added a 28oz can of crushed tomatoes, two pinches of sugar, a pinch of salt, and the drained meat. I added a little dried oregano, dried thyme, and some chopped fresh parsley, then let the whole thing simmer until the spaghetti finished boiling. I served it with a spring-mix salad tossed with some extra virgin olive oil and balsamic vinegar.
Posted by Unknown at 6:40 PM 1 comment: