My husband likes meat a lot. As in, when I ask him what he wants for dinner, his usual response is "some kind of meat and something to go with it". This afternoon when I asked him if he had any requests for dinner, it went like this:

me: Is there anything specific you want for dinner tonight?
him: Yes! Meatloaf!
me: ...meatloaf? Really?
him: YES! I would like meatloaf and mashed potatoes.
me: Ok. Meatloaf and mash...got it.
him: And peas!
me: Alright...and peas.
him: And onion gravy!
me: Meatloaf, mash, peas AND onion gravy. Sheesh. Ok.
him: *happy grin*

I used to HATE meatloaf as a kid (sorry Mom), so I'm always interested in trying different meatloaf recipes in an attempt to find the perfect one. I came pretty damn close tonight, and the recipe was right in my own kitchen all along! My much-loved and well-used copy of Mark Bittmann's "How To Cook Everything" had a nice simple meatloaf recipe that sounded worth a try. So...I got to work!

The recipe calls for 2 lbs of ground meat, and Bittmann suggests mixing beef with something else - veal, pork, what have you. I used a pound of nice lean ground round, and a pound of ground pork. I added breadcrumbs soaked in milk, a beaten egg, salt and pepper, some grated garlic, a smallish onion (also grated - it's way less work than mincing), and chopped parsley. The recipe called for sage, either fresh or dried. I was out of sage, which I didn't realize until I was elbow-deep in meat, so that was a bummer and I had to skip it. It also called for a minced carrot. I grated mine instead of mincing it. I mixed everything up by hand (my least favorite part) and formed it into a loaf on the rack of my broiler pan. I like cooking it this way rather than in a loaf pan because then you get a nice crust on most of the surface. A lot of what I never liked about meatloaf as a kid was the texture of it after it had cooked in a loaf pan in its own grease. Blech. Anyway - I liberally applied a layer of HP Sauce on the surface of the loaf, and popped it into the oven at 350 and cooked it for about an hour.

While the meatloaf was cooking I peeled 5 big russet potatoes and cut them into medium chunks. I boiled them till tender, then drained them and set them aside. For the gravy I thinly sliced one large white onion and cooked it down in a pan with about 2 tbsp each of olive oil and butter (hey, I didn't say it was healthy...that's why we don't have it every day or even every week). When the onions were nicely browned and softened I sprinkled 2 tablespoons of all purpose flour and a little black pepper into the pan and stirred thoroughly. I let the roux cook to a dark golden color, then added in about half a cup of beef stock and whisked vigorously. I let that cook about 30 seconds until it thickened, then added more stock and whisked again. Once it thickened up the second time I added the rest of the stock and whisked again, then turned the heat down and let the gravy bubble gently and reduce.

The potatoes were ready to mash at this point so I tossed in some butter and milk, salt and black pepper, and mashed away. I can never get them entirely smooth but I don't mind, really. Having some lumps in them reassures me that they're real potatoes, I think. ;)

The meatloaf came out of the oven just as the gravy was getting thickened up again. I put half a bag of frozen peas in a pot with 1/4 cup of water and covered, letting them steam while the meatloaf rested. When the peas were done, it was time to eat! 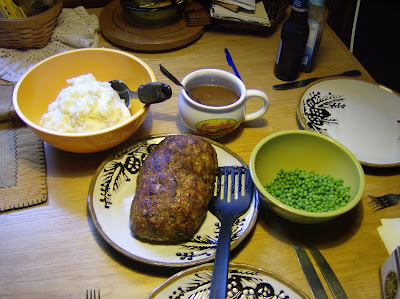 I don't have a gravy boat so yes, my gravy was in a Campbell's Soup cup. ;) The meatloaf was, in a word, wonderful. Really and truly. It was incredibly juicy without being greasy, and it had such good flavor. I can only imagine that having the sage would have made it even better (because I love sage). The only thing I'd change about the meatloaf recipe is that next time, I'll omit the carrot. It just didn't add to the flavor in a constructive way, I didn't think. I kept noticing it and thinking "what's that I taste? Oh, carrot again...yeah..." Other than that, this is most certainly going to be my go-to meatloaf recipe from here on out. 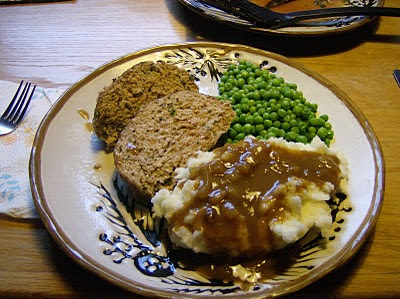 See how juicy? NOM! Also, this is a good shot of my gravy. I originally came up with the gravy recipe when Mark was explaining "Bangers and Mash" to me, since I'd never had it. It took a couple tries to get it right, but now that I've got it down, it's super easy (though not quick).

Last night I was wandering around the grocery store, looking for something for tonight's supper. I found some really gorgeous-looking super thick-cut pork chops. SOLD! I decided I was in the mood for some "pocket" potatoes on the way home, so I stopped to pick up some red potatoes and some garlic. I found some really nice-looking peaches as well, and decided I'd try a different spin on grilled peaches for dessert. I had zucchini and a lovely beefsteak tomato from a co-worker's garden hanging around the kitchen that I figured would make good sides.

For the pork chops, I wanted to keep them as simple as possible, so I tossed them with olive oil, salt, pepper, crushed garlic and rosemary, then put them on the grill. I've talked about "pocket" potatoes here before: sliced red potatoes, sliced garlic and thinly sliced onion tossed with salt, pepper and olive oil, all tossed together and sealed up in foil packets. They roast on the grill in the foil packets until done (usually about the same amount of time it takes the meat to cook). The zucchini was supposed to have some balsamic brushed on it, but I got involved in what I was doing and totally forgot! It came out rather bland and I'll try harder to remember next time...;) 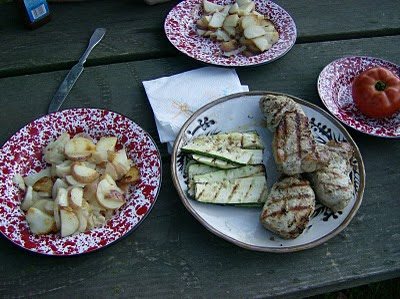 The pork chops were nicely juicy and had a good sear, but they didn't really taste all that porky, if that makes sense. They were alright, don't get me wrong, but I was just dreaming of a nice porky pork chop, and these didn't quite do it. The pocket potatoes were great, the zucchini was ok, and the tomato was lovely!

For dessert, I split two nicely ripened peaches, pulled the pits out, and rubbed the cut surfaces with some thin slices of fresh ginger. I sprinkled the cut sides with brown sugar and put them on a well-oiled grill for a few minutes. When I flipped the peaches over to cook on the other side, I placed slivers of the fresh garlic in the middles where the pits had been. I generously sprinkled with more brown sugar and then shut the lid on the grill for a few minutes to give the sugar time to melt and caramelize some. Once the brown sugary was syrupy looking and a little caramelized, I pulled the peaches off the grill and served them with some whipped cream. They were far better than my first attempt at grilled peaches, though nowhere near ad decorative! I missed the balsamic reduction I made last time. I think that reduction paired with the peach with ginger and brown sugar from this iteration would be perfect. Next time! 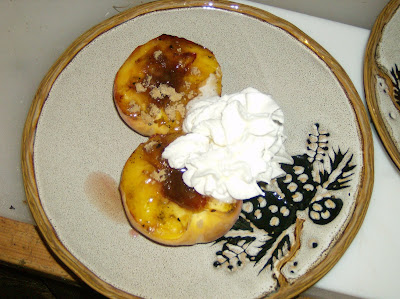 Posted by Unknown at 7:58 PM No comments:

pork chops and burgers and corn, oh my!

Sorry to have been absent for so long. We went on vacation to Indianapolis (to GenCon! Geeky!) for a week and I've been trying to recover all this week. Following are a couple of meals I've made in the past few days: 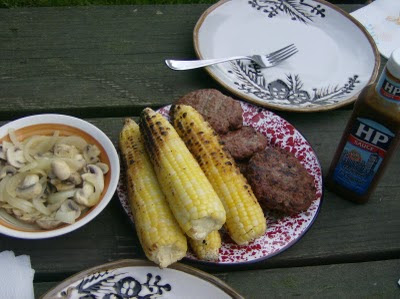 HP burgers with sauteed mushrooms and onions, and grilled corn on the cob:

My husband is Welsh, and he's obsessed with HP Sauce. I am of the opinion that it tastes like a slightly sweeter version of A-1 Steak Sauce, but he disagrees. Anyway, any time I cook meat that doesn't already have sauce or a strong flavor of its own, he puts HP Sauce on it. I decided that I'd save him the trouble with these burgers and just make them HP Sauce-infused. I mixed some HP Sauce into the meat along with salt and pepper, garlic powder and a bit of grated onion. I grilled the burgers along with some corn on the cob (I just rub it with olive oil and plonk it on the grill till it's toasty-looking), and sauteed some sliced onions and mushrooms to go atop the burgers. They came out great, though my corn wasn't the freshest and it came out kind of mealy. Normally with good fresh corn, grilling keeps it nice and juicy and tasty...but old corn is, well...old corn! 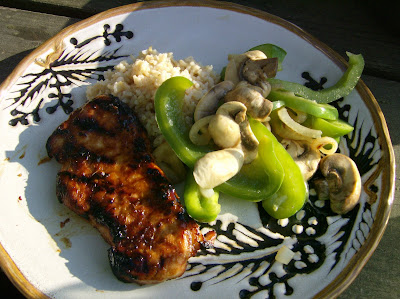 I love, love, love these. They're so easy and SO good. The marinade is just soy sauce, toasted sesame oil, brown sugar, grated garlic and grated fresh ginger root. I use boneless center-cut loin chops, and I spoon the extra marinade over the meat as it grills. I stir-fried some onion, green pepper and mushrooms to go with the meat, and I cooked up some brown rice with a bit of rice-wine vinegar in it as well. Next time I make these, I think I'm going to put the chops on the grill and dump the extra marinade in a pan to reduce down so that there's a sauce for the veggies and rice. Maybe a little tiny bit of corn-starch to tighten the sauce up...

I'm nearly ready to make them again right now, just thinking about it! ;)
Posted by Unknown at 7:06 PM No comments: