Today I was sitting at work when a deep longing for shrimp came over me. Over the course of the day, I dreamt of tempura shrimp, cioppino loaded with shrimp, even shrimp cocktail. My brain would NOT let go of shrimp. Toward the end of the day, after much Googling of cioppino recipes and consulting of the budget, it was clear that I was NOT going to be making any lovely mixed seafood stew for dinner tonight. I did, however, happen to have two bags of frozen shrimp in my freezer, so all was not lost!

I contemplated green curry for a while, but it just wasn't quite what I wanted. Dreaming of shrimp, I went on with my work day. Towards the end of the afternoon, it hit me: scampi. Garlicky, buttery, lemony, winey, shrimpy scampi. After that revelation, itt was on like Donkey Kong. I was on a mission.


On the way home, I stopped to pick up the few items I did not already have in the house for scampi - a bottle of white wine, some fresh parsley, and some lemons. When I got home, I defrosted the shrimp under some cold running water and peeled them (because apparently my idea of "peeled and deveined" is different than the shrimp manufacturer's...), then left them to dry on some paper towels while I finely chopped a small yellow onion and six cloves of garlic. Yes, six. Some of them were small. And I really like garlic.

When things were chopped and ready to roll, I put 4 TBSP of unsalted butter (I use Kerrygold Irish butter. It's wonderful and well worth the extra money) and 2 TBSP of coconut oil in a large pan over medium heat. Yes, I realize most recipes call for olive oil, but I like coconut oil better.

Once the butter had melted and stopped foaming, I added the chopped onion and garlic. Things went pretty quick from here on out - the onion and garlic only cook for a couple minutes, until the onion starts to become translucent. Then, the shrimp go in and get stirred around pretty frequently until they're about halfway cooked, which only takes 2-3 minutes. Then the wine goes in - I used pinot grigio but chardonnay would also be yummy. I used about half a cup. The juice of two lemons also went in. To that, I added a little salt and black pepper and just the scantest bit of cayenne pepper (which you can totally omit if you don't want any bite). I turned the heat down to low and let everything cook together for 2-3 minutes more, until the shrimp were fully cooked. I then killed the heat, chopped up some fresh parsley, gave it all a good toss, and plated it up: 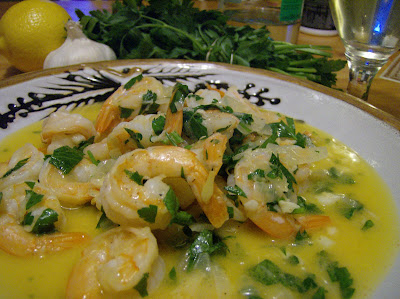 Yes, I realize that scampi is usually served over pasta or rice - something to soak up the fabulous sauce. I don't eat pasta or rice anymore, so I just skipped that part. And you know what? The sauce tastes just as good when you're slurping it up off the plate by itself as it does when you're slurping it up with pasta. When you tip the plate up to your mouth to get the last dregs of sauce, you know it's good! Next time, I think I WILL roast up a spaghetti squash to have with this simply because the shrimp would go a lot further with a filler like that...but for tonight, I shall revel in the decadence of straight-up shrimp in garlicky winey lemony butter sauce. Aww, yeah.

Posted by Unknown at 8:01 PM No comments:

Email ThisBlogThis!Share to TwitterShare to FacebookShare to Pinterest
Labels: shrimp

By now I'm sure you're all well aware of my fondness for all things curry. Mmmm, curry! Curry is not exactly a popular thing in Vermont, at least not in the part I live in. Every town around here has two or three pizza joints, and probably every town (on average, at least) has an Americanized-Chinese restaurant, but any other kind of ethnic food is pretty under-represented. We do have two Indian restaurants "near by" - meaning 30+ minutes' drive away - which means we never go to them.

Instead, I've learned to make my own curry and it's been a rewarding adventure. My first stab at curry was a couple years ago when my (then newly installed) UK-born husband started jonesing for the unofficial UK national dish, Chicken Tikka Masala. I'd never made anything so exotic as curry before, and I was a little nervous as I researched recipes and went shopping for ingredients. However, never one to back down from a cooking challenge, I gave it a go. It turned out yummy, and my husband's high praise gave me the confidence to try other types of curries. I've even converted my "what's in it, is it weird, what does it taste like, I don't know about this" parents into curry fans.

When I got "Well Fed", a Paleo-diet cookbook by Melissa Joulwan, I wasn't sure what to expect - especially after a couple of other sort of disappointing Primal- and Paleo-compliant cookbooks I'd recently bought. "Well Fed" was a pleasant surprise, full of  awesome photos, yummy-sounding recipes, and just the general way the book was put together. One of the recipes that really caught my eye was one for Rogan Josh, which I'd been recently thinking about trying to make. Huzzah! Happy coincidence! I bookmarked the recipe and, a couple weeks later, decided to give it a go.

Obviously I can't type the whole recipe out for you here because that's not cool (buy the book! Seriously! Worth the money!), but I can tell you that the meat is browned on its own (the recipe calls for lamb, but I used beef), and then has a nice long simmer with plenty of onions in a sauce made of cumin, coriander, cinnamon, ginger, and some other spices, along with coconut milk. The resultant texture is silky and lush. We had it spooned over some steamed cauliflower for dinner, and then we ate bowls of it like stew the next day for lunch. It's one of those dishes that improves with an overnight sit in the fridge, too. I'll definitely be adding this to my list of curry can-do's! 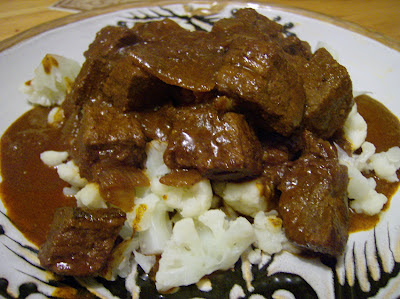