Hi all - just a quick note to let you know that I've not dropped off the face of the planet or anything. Just taking some time to get adjusted to my husband's new work schedule (and what that means for my cooking habits). I'll be back soon, I promise! :)

Another recipe I tried from Mark's Daily Apple this week was his Boeuf Bourguignon recipe. 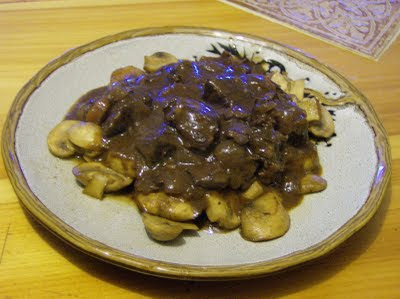 I'll tell you right off the bat that I've never smelled anything so amazing in my life as this stuff cooking in the oven for hours. Seriously. If I could bottle that smell, I'd be rich!

Anyway - this is basically just a French beef stew. You start with bacon (how can you go wrong?!), render some fat out of it, then brown a bunch of chunks of beef (I used a big chuck roast that I bought on sale and cut up into bits myself) in the hot bacon fat. The beef and bacon then go into a casserole dish, some seasoned flour is sprinkled over it, and it goes in a 425 degree oven for about 10 or 15 minutes, until the flour is absorbed and it starts to crust a little. Meanwhile, you saute a chopped onion, some minced garlic and a couple sliced carrots in the remaining bacon fat, then add some tomato paste, oregano, bay leaf, parsley, beef stock and wine (I used a cheap cabernet sauvignon to great effect). The liquid simmers for 10-15 minutes and is then added to the meat in the casserole dish. The whole thing goes in the oven for anywhere from 1.5 to 2.5 hours. This is where that whole smell thing comes in. Brace yourself for that, because it's fairly maddening. ;)

The recipe I was working off of called for browning the mushrooms separately and adding them after, but next time I'll just throw them right in with the meat and liquid before it goes in the oven, as I found the un-incorporated mushrooms kinda...meh. I think if they'd had a couple hours of soaking up wine and beef and bacon flavors, they would have added more to the dish. Also, the original recipe called for straining the meat out of the liquid and then reducing the liquid a bit before serving but I decided mine was thick enough and so I skipped that step.

This stuff was truly wonderful. Rich, thick, velvety, with amazing depth of flavor. All of the connective tissue in the beef (which there's a LOT in chuck cuts) melts during the braising and leaves the meat amazingly tender without being fall-apart soft or mushy. I think this has become one of my new favorite dishes. Even writing about it after the fact is making me salivate. I might have to go pick at the leftovers now. ;)
Posted by Unknown at 7:53 PM 1 comment:

Stuffed peppers are my husband's absolute favorite dish. These ones are an adaptation of this recipe from the Mark's Daily Apple blog, which replaces the usual rice stuffing with a mixture of meat, onions, seasonings and grated cauliflower. The original recipe calls for cooking the stuffed peppers in a slow cooker all day, but I figured if I pre-cooked the filling once I mixed it up, I could then cook the peppers in the oven with no problem. Turns out I was right. I cooked the filling in a frying pan until it was probably about half cooked, then stuffed the peppers, added a few pieces of super-sharp cheddar cheese to the tops and put them in a 425 degree oven for about 30 minutes. The filling cooked through, the peppers softened, and best of all, the cheese bubbled and toasted on top. 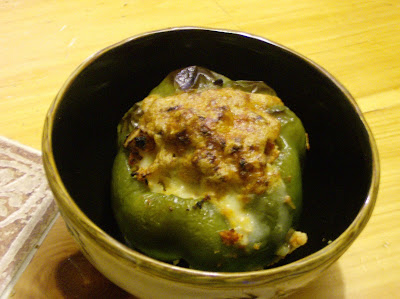 We really enjoyed these. I used half ground beef and half ground pork instead of the 2lbs of pork the recipe called for. The texture was obviously a bit different than traditional stuffed peppers, but in a nice way. Next time I think I might grate my onion rather than chop it, so that it's finer and gets better incorporated into the mix. I might also add a can of diced tomatoes along with the tomato paste. Other than that, I was really happy with these and will definitely make them again.
Posted by Unknown at 7:31 PM No comments:

I've made this one a few times. I actually got the basic recipe from the Mark's Daily Apple blog a long time ago, and have tweaked it a couple different ways to fit what I've got in the house at the time.

The basic gist is that you chop up some bacon into little bits, fry it, then drain the bacon and reserve some of the fat. Leave the rest of the fat in the pan, and cook some cut-up chicken thighs in it. Use the reserved bacon fat and some apple cider vinegar plus some dijon mustard to make a vinaigrette. Dress some lettuce (I use romaine) with the vinaigrette and top with chicken, bacon, cut-up avocado, chunks of green apple, red onion, and whatever else you have hanging around. I indulged a little tonight and picked up some wonderful locally made raw-milk cheese to shave over my salad as well. You could easily use Parmesan instead, or a nice sharp cheddar. 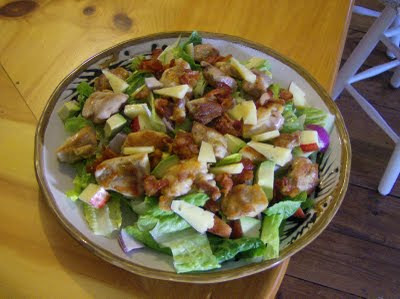 Posted by Unknown at 9:17 PM No comments:

Bulgogi is a type of Korean barbecue. Traditionally, it's grilled on a hibachi, but it works pretty well done in a pan on the stove top, too. 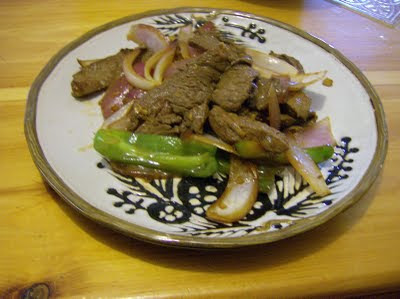 Bulgogi is dead simple to make, as long as you've got some Asian kitchen staples hanging around. The meat is marinated in a mixture of soy, toasted sesame oil, brown sugar, garlic, fresh ginger, and chili oil for 15 minutes to a few hours, and then grilled or seared in a hot pan. The veggies are tossed in a little of the marinade as well and grilled or stir-fried. Bulgogi is sometimes served wrapped in lettuce leaves, but I prefer to just eat it straight-up.

For this batch, I used a really cheap piece of meat that was labeled as "london broil" when I bought it. I was curious what cut it actually was, so I started Googling and asking around, and the best guess we can come up with is that it's another name for flank steak. It would make sense, given the texture of the meat, especially when I cut it across the grain. It was nearly falling apart to begin with, and it didn't toughen up one iota when I cooked it. It was literally melt-in-your-mouth. So good.

Here is the recipe I use, if you want to try it:

I used two red onions cut into wedges, a green bell pepper cut into strips, and sometimes a bunch of white button mushrooms for veggies. For meat, try to get flank steak (or london broil?), about 1.5 lbs. You'll also need oil to fry in. I used coconut oil this time and it worked great.

You can either put the meat in the freezer for about 20 minutes to firm it up before slicing, or if you have a super sharp knife like I do, you can just go at it. Cut it across the grain as thinly as possible and toss it in the marinade. Let it sit for 15 minutes to a few hours.

When you're ready to cook, heat 2 tbsp of oil over medium-high heat in a large pan. Stir-fry the veggies first. You may have to work in batches, depending on how big your pan is. When the veggies are done, set aside. Wipe out the pan, add 2 more tbsp of oil, and add strips of meat. You want to do this in batches so as not to crowd them, and keep in mind that the meat is sliced very thinly so it really only needs a sear on each side to cook through. You can cook it longer if you WANT to, of course...;)

Combine the veggies and meat with any accumulated juices, and serve on lettuce leaves or just heaped happily on your plate. YUM!
Posted by Unknown at 9:06 PM 1 comment:

I find myself coming down with a bit of a cold. When I'm feeling stuffed up and with a sore throat, the only thing I really want is soup. I usually make just a simple chicken soup with carrot and celery, but tonight I wanted something a little different. I ended up settling on egg-drop soup because it's loaded with protein and is very simple and inexpensive to make. Combine broth and water in a large pot, add salt to taste if desired. Smash six scallions and chop into thirds. Peel ginger and slice. Add scallions and ginger to liquid and bring to a simmer. Add chicken breasts and allow to poach in simmering liquid for about 15 minutes, until chicken is cooked through. Once chicken is cooked, remove and let broth simmer for an additional 10 minutes. Shred chicken and slice the remainder of the scallions. Remove ginger and scallions from the broth (I put a strainer over a large bowl and carefully dumped the contents of the pot into it, then dumped the strained broth back into the pot). In a separate bowl, beat three eggs with a whisk until combined, then pour the egg in a slow steady stream into the simmering broth while constantly whisking. Remove from heat and ladle into dishes. Add shredded chicken and chopped scallions, and drizzle toasted sesame oil across top, to taste.

It was a nice change from our usual soup, and filled us up for not a lot of money or effort, which is always nice. :) Plus, this soup fits nicely in with our Primal eating, as it's high-fat, moderate-protein and low carb, with no grains in sight!
Posted by Unknown at 8:12 PM No comments:

So, we're trying to eat Primal again, which among other things means that we don't eat grains. I was having an incredible mac and cheese craving the other day and was lamenting the fact that I couldn't have pasta when I suddenly realized something: I always used to put cauliflower in with my mac and cheese anyway in an attempt to sneak one more serving of veggies into my husband. Cauliflower is quite bland, and the only reason he even noticed I added it to the mac and cheese was because the texture was slightly different. So, why couldn't I just substitute cauliflower for the pasta completely?

The answer, happily, was that I COULD! Check it out (sorry the picture is a bit blurry): 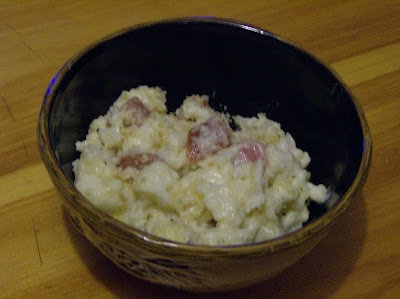 Basically, what I did was take a head of cauliflower, trim it and chop it into small florets, then cooked it in salted boiling water for about 10 minutes until it was tender. While the cauliflower was cooking, I made a batch of my standard cheese sauce - a roux of butter and flour (not technically primal, but it was only a couple tablespoons and I'm sure some non-wheat flour could easily be substituted), powdered mustard, onion powder, black pepper, milk and cheddar cheese. I drained the cauliflower, added some chopped kielbasa, then mixed in the cheese sauce. The mixture went into a casserole dish and was baked at 450 for about 25 minutes. The top got all lovely and toasty, and it was creamy, cheesy and wonderful in the middle. And best of all, it satisfied my mac and cheese craving without the pasta.

I'll definitely make this again, although next time I think I'll substitute a little bit of bacon or ham for the kielbasa, as I found the kielbasa to have a bit too strong of a flavor in this application.
Posted by Unknown at 7:44 PM No comments: