My original aim last night was to stuff some pork chops, but I couldn't find any pork chops thick enough. I considered trying to take two thinner chops, putting some stuffing between them and then tying them together with cooking twine, but that sounded like a lot of work. Instead, I spotted a boneless pork roast that looked big enough for me to split down the middle and stuff. I was pretty sure that was going to be less work, so I was sold.

The stuffing was simple - chopped mushrooms, onion, parsley, garlic and a splash of sherry, cooked down until soft. While the stuffing cooked, I split the pork roast and pounded it out (gently, I swear!) between two pieces of plastic wrap until it was a relatively even thickness. I laid a few pieces of prosciutto across the inside of the roast, then spread the stuffing over it. I sprinkled some feta cheese over the whole thing and then carefully rolled the roast up as tightly as I could. I tied it closed with three pieces of string and liberally salted and peppered the whole thing. I then seared each side for a few minutes apiece in my cast-iron pan while I preheated the oven to 450 degrees. When the roast was nicely browned on the outside, I covered the whole pan with foil and popped it into the oven for about 20 minutes. Once the roast hit 140 degrees, I pulled it out and set it on a plate and let it rest for about 10 minutes, then sliced it and served it over some Parmesan-sprinkled steamed spinach. Don't worry, it looks quite a bit more pink in the picture than it actually was in real life.

This was very tasty, and relatively easy. The main issue was getting the roast pounded to a consistent thickness and making sure I didn't OVER-stuff it. Over-stuffing leads to the good stuff falling out in the pan, and that's no fun at all. Also, this is pretty cost-effective if you happen to hit a good sale on boneless pork roast like I did.
Posted by Unknown at 7:33 PM 2 comments:

Chimichurri is a salsa (a sauce) originally from Argentina, and is used widely in South America on grilled meats. It consists of different things depending on the region and the cook, but the most basic version is a mixture of fresh parsley, cilantro, green onion, olive oil, vinegar, and garlic.

I had some salmon I wanted to cook, and some leftover sirloin steak tips from the night before, so I figured I'd try to combine them for a bit of a surf & turf. I seared the salmon in my cast iron pan in some melted bacon fat - it took about 5 minutes per side because the filets were quite thick. This was actually my first time doing salmon in the frying pan, and I'm a convert. The skin comes out so wonderfully crispy...yum! My steak tips were already cooked from the night before, so I just threw them in the still-hot pan with the fish and let them warm through.

The sauce itself is ridiculously easy....if you have a blender or food processor that works. I found out the hard way that my blender doesn't like to whiz up parsley, so I had to scoop everything out onto a chopping board and go at it the old-fashioned way with a big knife. It was good for stress relief, at the very least!

When the sauce was done, I plated everything up and spooned it over the salmon: 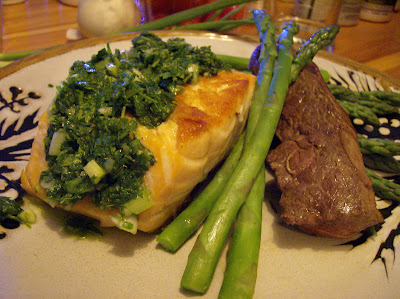 It was a very yummy combination. The acid and herbal brightness of the chimichurri cuts through the fattiness of the salmon very nicely Even my husband, who is not generally a fan of salmon, said he liked it and would eat it again, so we'll add this one to the repertoire. :)

Here's a quick listing of what I put in the chimichurri - you can just chuck it all in a food processor or (dependable) blender, or chop it by hand, or even mortar-and-pestle it if you want to go really old-school:

My husband asked for shrimp curry for dinner the other night, but we ended up going out instead. Never one to forgo a chance to make curry, I acted on the request last night instead! Hubs likes shrimp, he likes curry, but he'd never had mussels (or any shellfish at all, it seems - no clams, no oysters...bwuh?!). I had been wanting to do some curried mussels for a while anyway, so I made him a deal - I'd make the shrimp curry and cook the mussels separate and then he could try one and see if he liked them. If he did, I'd add them into the curry. If not, well...more mussels for me.

The thing I DIDN'T tell him (sorry sweetie, if you're reading this) was that he was going to get a dose of mussel goodness either way, because my plan was to steam the mussels and then use the steaming liquid as the base for my curry. I sauteed some shallot and garlic in a big pot in some coconut oil while I cleaned and de-bearded the mussels, then added some white wine and some water (I had less wine than I'd thought...a common problem at my house. Ahem.) to the pot and dumped the mussels in. They steamed for about 5 minutes while I shelled my defrosted shrimp. I then scooped the mussels out, ate a few because I can't help myself, and set the bowl aside. I checked to make sure the cooking liquid didn't need to be strained, but this batch of mussels was very clean and not gritty in the least. I added a can of coconut milk, a couple tablespoons of red curry paste, a few good sloshes of fish sauce and a little more water, then mixed it all up well. I had pre-cooked some cauliflower by steaming it in the microwave for a few minutes (because Impatience is my middle name and I didn't want to dick around waiting for the cauliflower to soften in the broth, which takes like 20 minutes), so I threw that into the pot, added some sliced mushrooms, and turned the heat up to get a good simmer going. Once the liquid was simmering, in went the shrimp. Because shrimp cook so quickly, I actually shut the heat right off as soon as I added them into the pot...there was more than enough retained heat to cook them through.

It was then make-or-break time. I took a spoonful of the curry broth, placed a nice fat mussel on it, and took it over to my husband. He looked at it a bit warily, and which point I said, "you said you would try it!". He gave a bit of a resigned sigh and popped it into his mouth. He declared it "ok". I asked if he wanted some of the mussels in his bowl of curry, and he said "sure, if you de-shell them for me". So, I took a few minutes to shuck the mussels out of their shells, threw them into the pot, gave everything a good stir, and we were ready to eat:

I had to go a little easy on the curry paste because this batch seemed quite a lot hotter than the last few batches I've gotten, and Hubs can't do really spicy food. So that's why the sauce is pretty light-colored. Also, I forgot the basil AGAIN. I don't know what it is with me forgetting basil, but pretty much anything I make that requires it ends up with me trudging back to the store to get it because I've forgotten it. Or just skipping it, in last night's case.

This was pretty yummy, but a little too coconut-tastic for me this time. Next time, I want to try the shrimp and mussels together in a tomato-based tikka masala type sauce.
Posted by Unknown at 11:10 AM 1 comment:

I've made this Eating Well recipe a few times, and it's fantastic. Fish and tapenade might sound like sort of an odd combination at first, but cod can certainly stand up to the strong flavors of olive and capers. The original recipe suggested orzo and sauteed spinach to serve with it. As orzo is just pasta, I skip that part. I serve the fish and tapenade on a bed of steamed spinach and it works very well.

Definitely give this recipe a try! 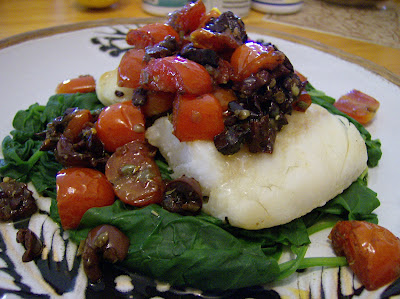 Posted by Unknown at 6:46 PM No comments: