Your basic New England clam chowder is typically made with clams (obviously) and clam juice, salt pork or bacon, celery and potato, some milk, and a roux to thicken it. Since we're gluten-free, thickening with a roux wasn't going to work, and since we try to eat low-carb, loading the chowder up with potatoes wasn't going to work either. I wondered to myself if I could somehow thicken the soup with cauliflower, since it's fairly bland on its own. I've had good luck subbing cauliflower for potatoes, rice, sometimes even pasta ( in the case of my not-mac and cheese). Maybe if I roasted it and then used a stick blender to puree it, I could add it to the soup to give it some body.

I started with chopping a head and a half of cauliflower roughly and then tossing it in olive oil. I added a couple cloves of garlic sliced up, and it went into the oven at 450 for about 30 minutes. In a big pot, I browned some chopped-up bacon, then added some shallots, celery and leeks. I let this all cook down until the vegetables were soft, then added the cauliflower, and some low-sodium chicken stock. I used the stick blender to whiz it all up in the pot, and to my delight, the cauliflower did just what I had hoped it would. It turned into a silky puree that added a wonderful thickness to the soup. With that sorted, I added my seafood.

Now...don't flip out on me, here. I used canned clams. I KNOW. Deep breaths, it's going to be ok. I know that fresh clams would have tasted better and had better texture, but given that I wasn't sure if the cauliflower part was going to work the way I wanted to or not, you can hopefully understand why I didn't want to invest the time and money into getting and prepping fresh clams.

So - into the pot went three cans of clams and their juice, plus some more bottled clam juice. I added a splash of sherry (because, as my ever-wise mother-in-law would say, sherry makes everything better), a couple pinches of sea salt, and about 3/4 of a cup of cream. Because I now subscribe to the "one can never eat too much fish" school of thought, I also added in a pound of cod, cut into bite-sized pieces. I let the whole thing simmer for 10 minutes until the cod was cooked through, then scooped it into some bowls and added a little chopped bacon to the top for crunchy goodness.

This could have easily gone without the cream, I think. The cream was basically just gilding the lily. Next time I might use half-and-half instead, or even just milk. The cream certainly didn't make it taste bad at all, but it was pretty rich, and we don't really need all that dairy. All in all, though...I was quite happy with how this turned out (aside from the fact that the bacon sunk down into it before I could take a picture).
Posted by Unknown at 6:00 PM No comments:

how to get your husband to eat seaweed

I've had a bag of dried wakame (seaweed) sitting on my counter for a couple weeks. I bought it because I wanted to start incorporating it into our diet, but I wasn't really sure how. Tonight, as I was roasting some cod and sweet potatoes, I decided to reconstitute a little of the wakame in water to see what it tasted like. When it rehydrated, I realized that it was quite similar in look and texture to kale. It mostly just tasted a little salty. I wondered if I could combine it with kale, saute it with some bacon and onions, and get my husband to eat it. Lo and behold, bacon conquers all and my semi-evil plan worked! Mark didn't say a word about the seaweed as he was eating it, and when I pointed it out afterward, he said that hiding it with bacon was definitely a good idea.

I know the sweet potatoes look burnt, but they weren't, actually...they were nicely caramelized. I could have done with shaking the pan with a little more frequency for more even browning, though.

The green stuff atop the cod is from this recipe on Nom Nom Paleo (who I love with the firey passion of a thousand suns. Was that weird? Who cares, it's true). It's olive oil infused with anchovies, capers, crushed red pepper, lemon juice and parsley. It was good, but I wish I'd have thought to halve the recipe before I started making it, because it made a lot more than I needed.

So, that's ONE way I can get my husband to eat seaweed, at least!

Posted by Unknown at 5:59 PM No comments:

One of my favorite things to have for breakfast is sauteed kale with runny-yolked eggs on top and a drizzle of Sriracha. 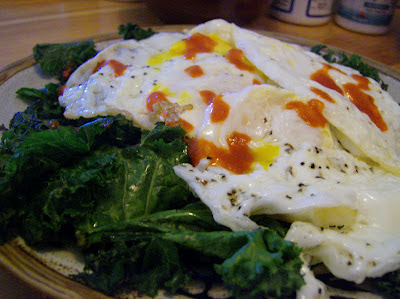